For our last unassisted birth and the 911 audio recording, check this out. Edit: *I wrote this a couple of months ago, but am only just getting around to sharing it. I’m not editing any of my words but I want to clarify that we had midwives here in Charlottesville that practice traditional midwifery and I wouldn’t change a thing. They gave us the complete, holistic, incredible care that we needed and didn’t even know that we needed.*

It’s been just over two weeks since our son’s beautiful birth and it’s time to share a little bit of the story. We knew that after sweet Tupelo was born (on the side of the road), that we wanted to have a homebirth so we found a midwife from Savannah to help us along the journey and when we moved to Charlottesville about halfway through our pregnancy, we found another midwife. We were fully supported by both of them and their co-midwives/partners throughout our pregnancy and I know that the confidence and peace that they all instilled in us gave us the confidence and peace to deliver this precious little boy without intervention. 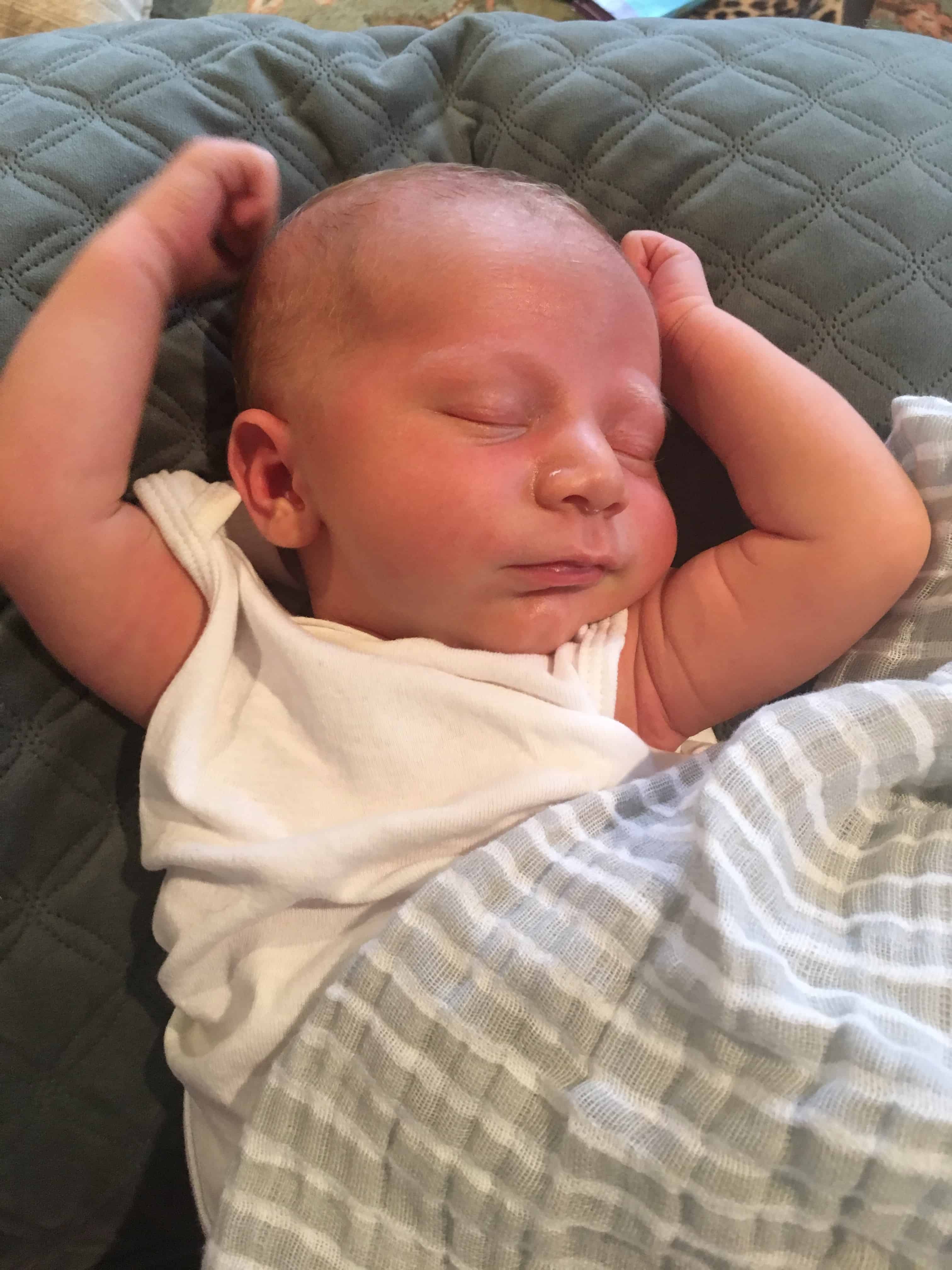 We weren’t planning an unassisted homebirth and I don’t think we were truly unassisted because of the midwifery care that we received and the invaluable training and support that our doula provided a few years ago when we had our first vaginal hospital birth after two csections.

All of those things, in addition to the endless research and prayers and preparation and past birth traumas and good birth experiences, gave us exactly what we needed to have the best homebirth experience that we could have asked for. And we did. 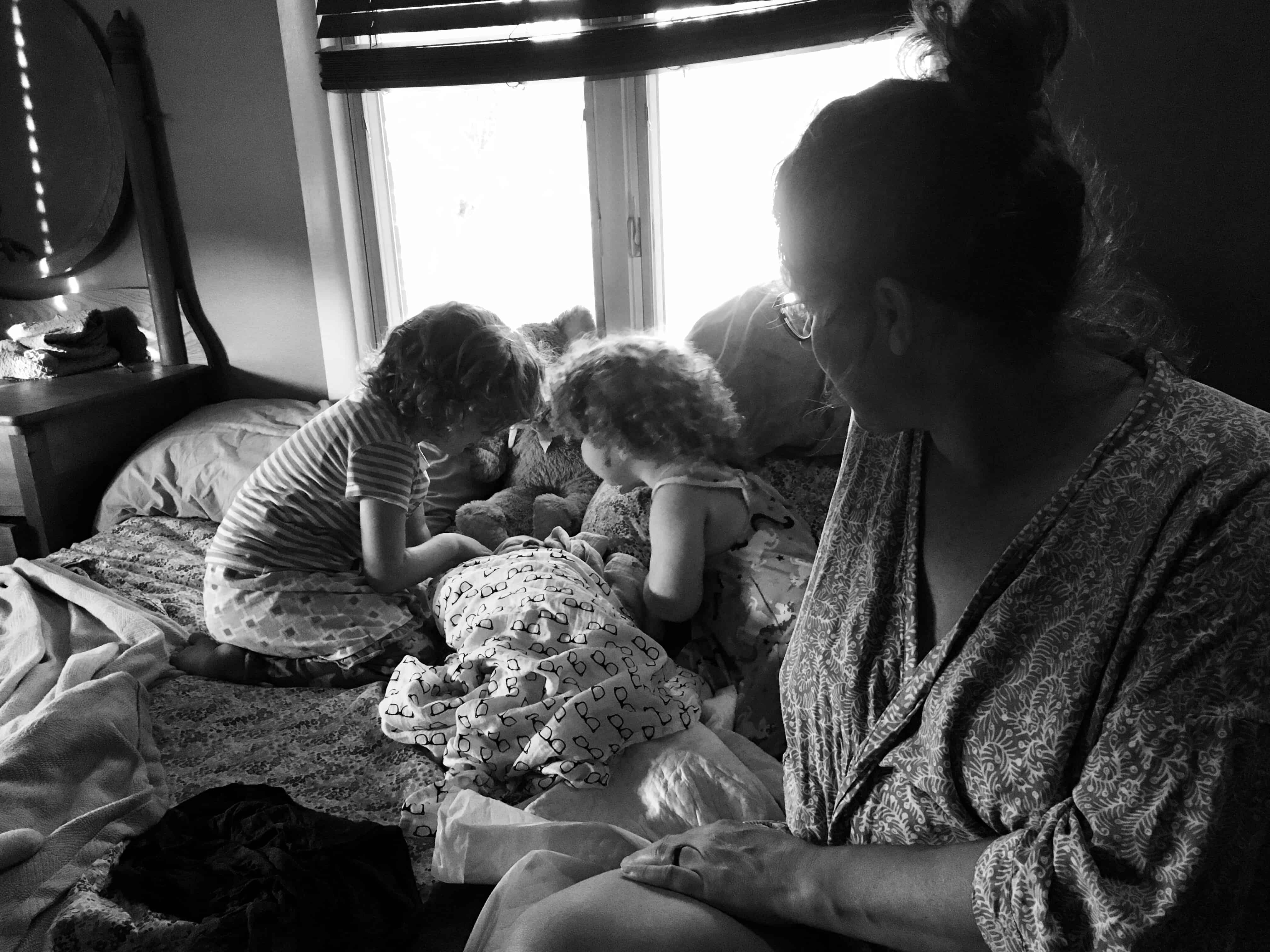 The night our boy arrived, I got incredibly ill.  Major dizziness and food poisoning symptoms wreaked havoc and I prayed that no one else in the house would get sick. Andy asked if I’d had a drink of the river water earlier that day, because of the sheer magnitude of the symptoms. The ‘sick’ was actually early labor but I’d never had out of my head dizzy/light headedness like that in my life so I just thought I was really sick. I called our midwife and told her I was sick but I wasn’t having any contractions. I just wanted her to know how utterly miserable I was and perhaps I thought that after vomiting my guts out that i’d be dehydrated or go into labor or who knows. Maybe I just needed her sympathy as I was on the toilet and crawling around, but she told me to take some Benadryl and lay down and try to rest and stay hydrated. That was around 9pm on Saturday night.

Andy had already put the kids to bed while I was on all fours dry heaving into a bucket, but I was able to sleep after my body emptied itself of everything except our baby. It wasn’t exactly how I envisioned this birth story beginning but when I woke up at 1am with those blessed contractions, I knew labor was upon me. I didn’t wake andy up. I didn’t call the midwives. I thought about what one of them said at my last prenatal appointment so I started fluffing up the living room and putting some bananas in the freezer because I knew I’d want a banana and peanut butter smoothie after the baby was born. Elizabeth said that ‘if you only had one hour until your baby arrived, what would you wish you’d have done. Do that.’ So, I prepared our living room for company and got some smoothie ingredients ready while the contractions got closer and stronger. I probably should have called the midwives when my contractions started or when I knew they were increasing in strength but I didn’t want them hanging out playing cards (totally kidding!) or wishing they were in their own beds if we had 36 hours in front of us, like we did with our hospital births. So, I labored privately. 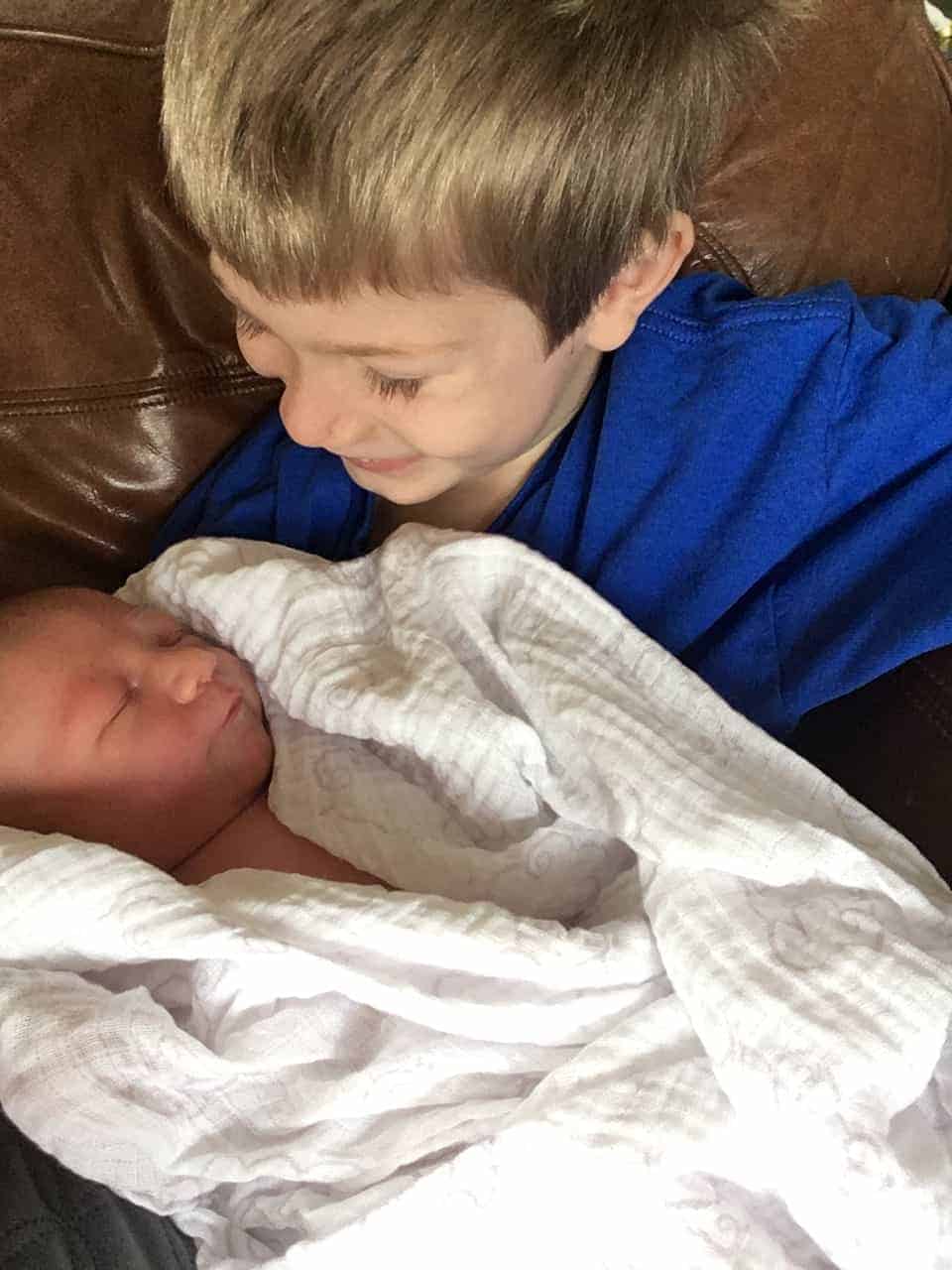 I started a bath and got back in bed and labored alone until 2:30 when Andy woke up because he heard me. I got into the bath and I was gripping the side of the tub trying to get comfortable when Andy looked at me and said something along the lines of ‘I think you’re in labor’ and then he walked out to call the midwife (I found out later that he called them and told them that he thought we had about four or five hours to go).

At that point contractions were very intense. I was focusing on breathing and trying very hard to relax in between contractions. I knew that we were in the throes of active labor and that the best thing I could do was to breathe and relax and let my body do the work. It wasn’t easy. It was hard. I’ve forgotten the feeling of those contractions already, but in the midst of them, I was overwhelmed.  Andy started timing them and it was all I could do to say ‘now’ when a contraction started. I’d moved back to our bed by now (the tub didn’t quite do it for me-it’s not a soaking tub and we didn’t have a birth pool because I didn’t call the midwives) and I was probably gripping Andy’s arm out of its socket by this time and totally inside of myself because he says he lost contact. I thought I was communicating plainly with him because he was very in tune with what I needed and following directions (come to find out I wasn’t verbalizing anything to him). The rest that I had between contractions felt like hours and I relished them. It was actually only about a minute but the relief that it gave me was so much greater. As the contractions increased, I reached the point where I couldn’t go on and I told andy that I couldn’t do it. Before that point, I was saying, I can do this, I can do this. But, then I couldn’t. 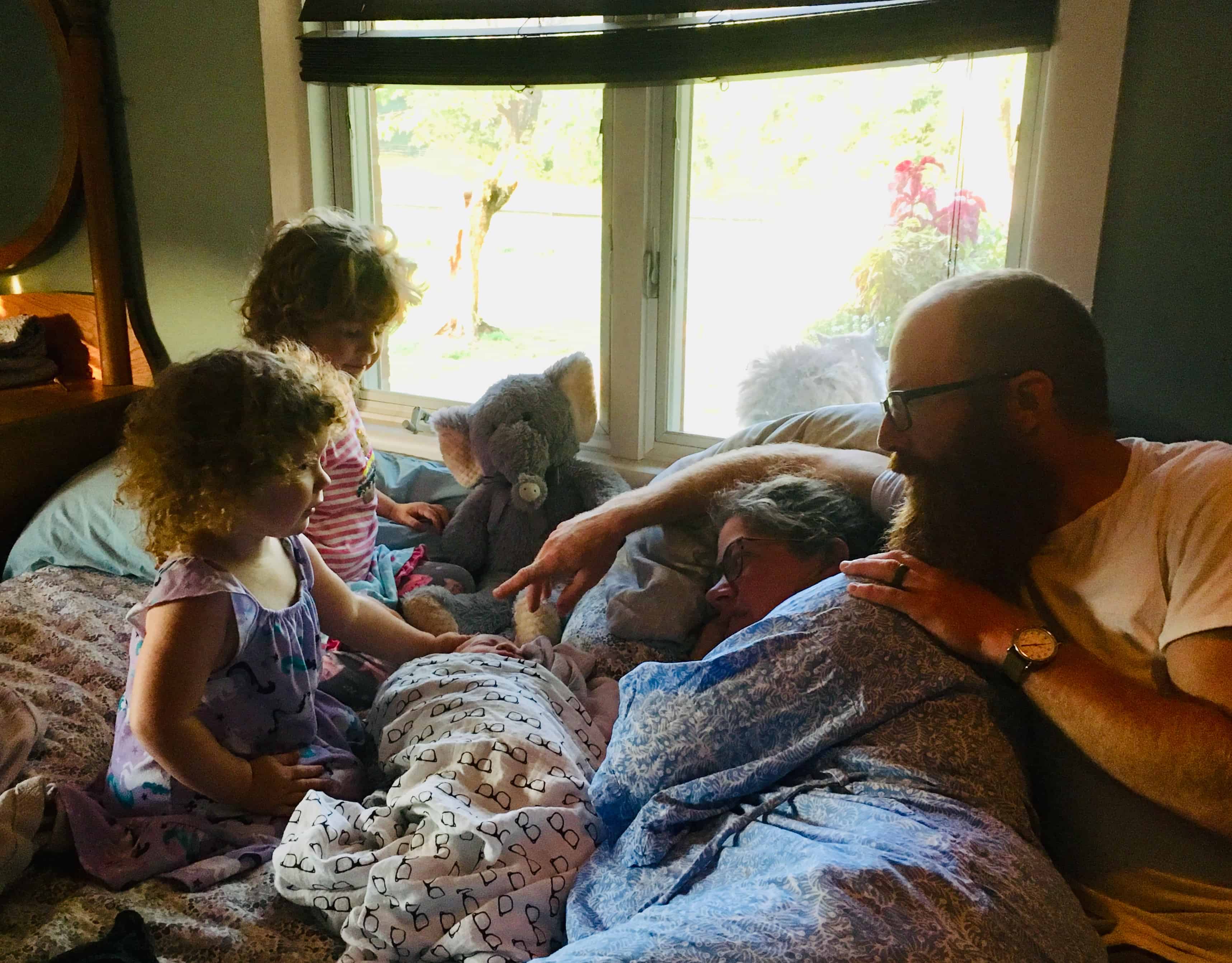 I felt the baby’s bag of waters emerge. I’d been on my side on the bed throughout those 20 minutes or so of intense contractions (or waves or surges as some schools of thought like to suggest) but I instinctively got up off of the bed and stood next to it for the next ‘wave’. My waters broke and with another push, I felt the baby crowning but, I wasn’t ready to deliver, so I placed my hand on its head to sort of support it and relieve some of the intense pressure and feeling of being torn in half (that’s called the ring of fire for good reason!).

Andy asked me to move to the end of the bed where he’d put down some waterproof pads and had more room to maneuver around me so I moved a few feet over before the next push where the baby’s head emerged. I didn’t rush to push again but waited until the next urge came. It came within a minute or so and the baby’s body was delivered. Andy was behind me and told me he would catch the baby after I told him that I would. I acquiesced and he ‘caught’ our 5th baby and our 2nd that we delivered together without anyone else around. I leaned on the bed a bit for some deep breaths and a moment of respite while Andy looked over our precious blessing and exclaimed that we had a boy. This was our first time being surprised with the gender and it was amazing. I sat down on the floor after Andy passed our son back to me. He started to clean up the area and get a bowl for the placenta that I would soon deliver. We didn’t cut the cord, we didn’t immediately start weighing or measuring or finger printing or heel pricking. We just slowly embraced this new life and I held him and let nature take its course.

It was the most beautiful birth I could have asked for and despite the pain near the end and dealing with the most challenging pregnancy that I’d had yet, it was all worth it! 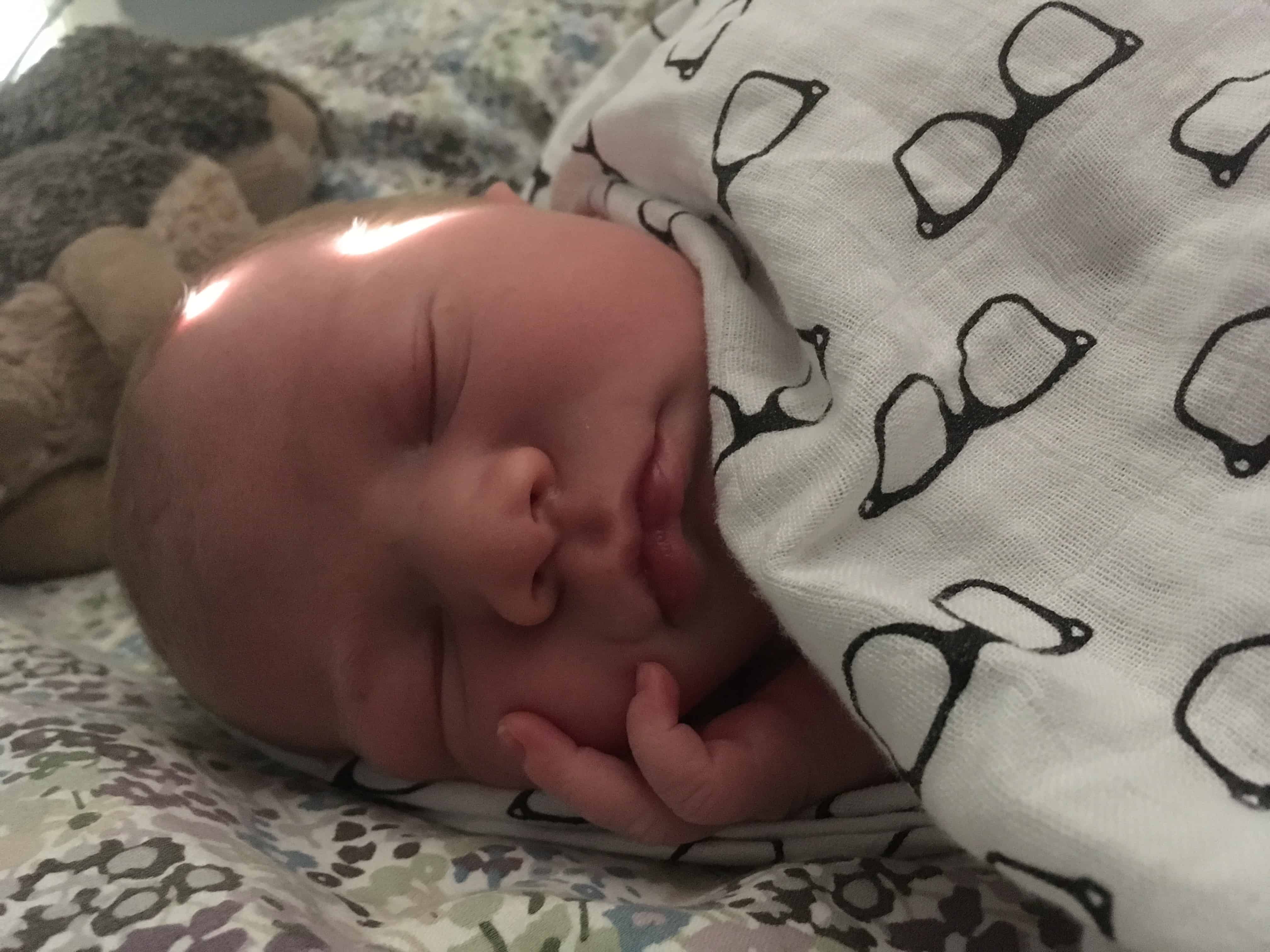 I remember feeling so completely broken when our first son’s birth ended in a csection and the doctor told me that I was incapable of ever having a vaginal birth because my body wasn’t built for it. I knew it was a blessing to be able to carry a baby at all and I tried desperately not to dwell on the shame that I felt from having a csection (and then another one), but with our third baby being born without a csection and our last two being born without anyone else around, i can say that I’m finally not afraid of childbirth. It’s a beautiful and amazing thing and I love that we had the most wonderful midwives by our side throughout the entire process. They did arrive shortly after Little Mister arrived (they’d have been present for his birth if I’d had called them!) and they checked our vitals, checked me for tearing to see if I needed stitches and did a plethora of other things that go unnoticed by an untrained eye like mine. I can’t recommend midwives enough. They are empowering and the care that we received was starkly different than the mainstream care that we received in times gone by. To say they are ‘with woman’ is an understatement. They are with woman, with child, with husband, with family. They are the support and the hands and hearts and care that we all need. They are masters of their craft and know when to do what and why. They are the unsung heroes of maternity care and i’m grateful to know them!!!

We live on 1100 acres in the heart of Georgia. 1100 acres! That’s a lot. That’s a lot of land. Land with pastures, ponds, woods and a river. We are on a mile of the Ohoopee River. A mile! It’s surreal. Really. We are caretakers of all of this space and loads of animals. There…

Did I already share that we’re expecting a new little honey bee to join our crew? Well, we are thrilled and finally over the first trimester woes of nausea, exhaustion, queasy goodness that always accompanies my baby’s earliest weeks of development. I’m thankful for each season and this last one has been a doozy. We…

The kids and I had a big morning out as we went to the local coffee shop, the library and the park. It was such a treat to park the van, load everyone up in the stroller, meet up with a couple of friends and enjoy our morning. First stop, the kids chose a chocolate…

There is this gorgeous restaurant with really great food just down the road from us. It’s half an hour down the road and I drive by hay fields and cotton fields and cow pastures to get there. I drive down rural highways and arrive at this historic downtown corner of Lyons, Ga and am immersed… 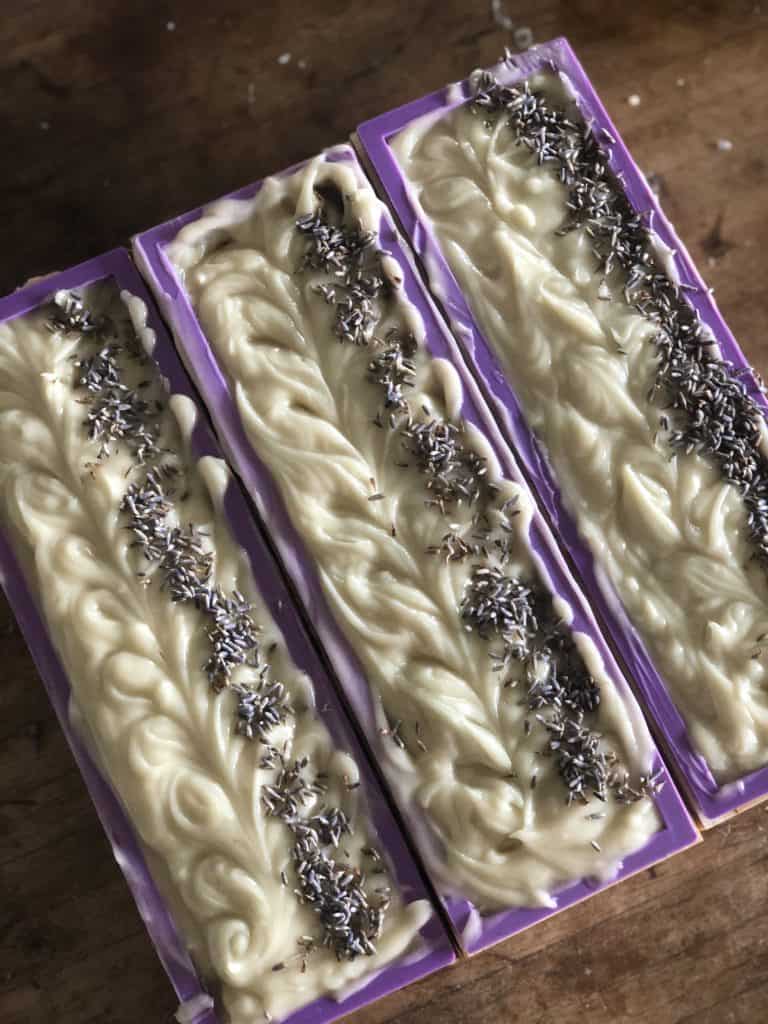 We’ve already packaged up more than half of our inventory for delivery with the shop being live for only three days. We are thankful and humbled over here for sure. As I’m looking at the order forms and waiting for the regional rate boxes to arrive, (who knew shipping was so streamlined these days with…